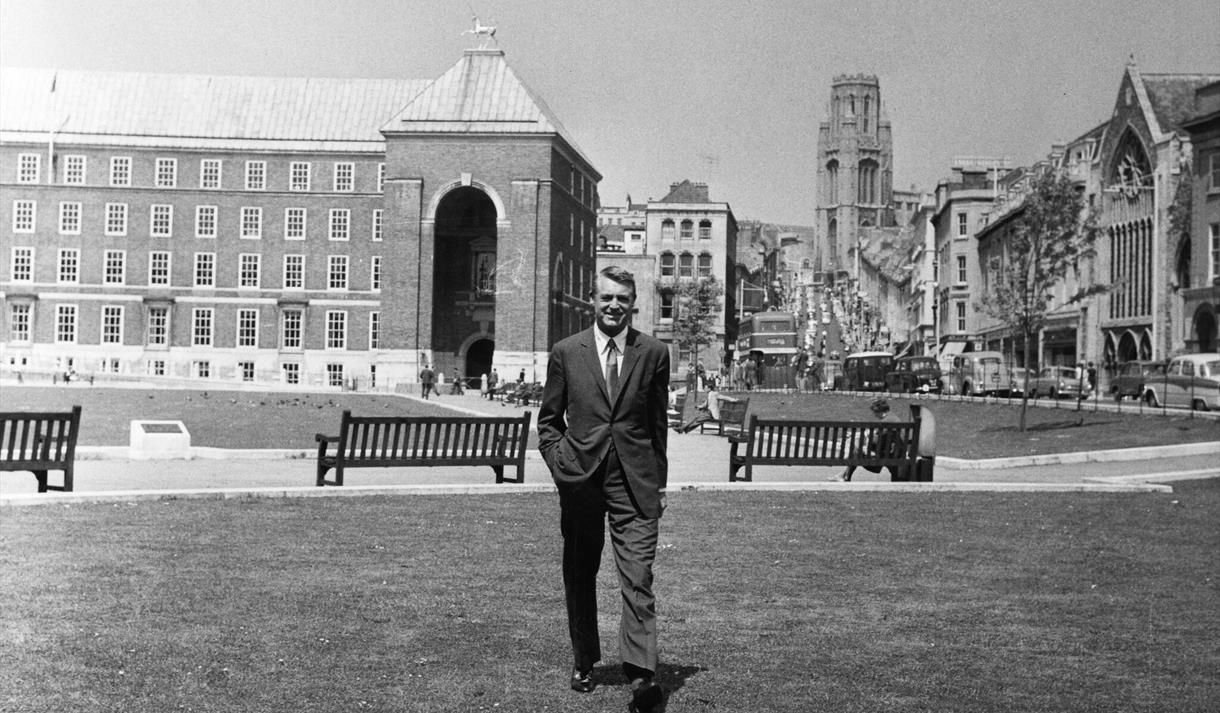 Bristol puts on a weekend of events celebrating the life and work of one of the city’s most famous sons: the Hollywood actor and style icon Cary Grant.

Cary Comes Home for the Weekend Festival is a celebration of Cary Grant’s Bristol roots, with the aim to develop new audiences for his films and recreate the much loved golden age of cinema-going.

Ticket prices start at £5, rising to £20, and will go on sale in mid September.

Friday 23 November
7.00pm - 9.30pm
Becoming Cary Grant
(Dir.: Mark Kidel, 2017, UK, 80 mins)
Launch reception, screening + discussion
To open the festival, a screening of the award-winning documentary Becoming Cary Grant in which the star’s mental health challenges and LSD use are exposed, in the former asylum hospital where Grant’s mother was hidden from him for 20 years.  The screening will be followed by a discussion led by the film’s director Mark Kidel; Professor David Nutt, an expert on the impact of drugs on the brain; Cary Grant expert Mark Glancy and Stella Man from Glenside Hospital Museum.
Tickets: £13/£11
Venue: UWE Glenside Campus, Chestnut House, Blackberry Hill, Bristol BS16 1XL

Saturday 24 November
10.00am - 11.00am
Hitchcock and Cary Grant: “The only actor I ever loved”
Broadcaster and author Matthew Sweet chairs separate but related talks by film historian and author Mark Glancy and Kathrina Glitre exploring the decision by Cary Grant to risk the huge popularity he’d won as a star of screwball comedies by taking on darker roles directed by another Englishman who achieved international fame in Hollywood: Alfred Hitchcock.  Both talks are illustrated by film clips; draw on the collected papers of both Grant and Hitchcock and reference all four of the Grant/Hitchcock films showing at this year’s festival.
Tickets: £8/£5
Multi Offer: £2 off if also booking for SUSPICION
Venue: Watershed, 1 Canon’s Rd, Bristol BS1 5TX

11.30am - 1.00pm
Suspicion
(Dir.: Alfred Hitchcock, 1941, USA, 99mins, PG)
A big screen showing of Hitchcock’s first of four collaborations with Cary Grant – an assured romantic thriller, co-starring Joan Fontaine as the wealthy spinster who falls for an apparent charmer only for events to suggest he may be darker and deadlier than he seems. The screening will be followed by a panel discussion with Cary Grant experts Mark Glancy and Kathrina Glitre, chaired by Matthew Sweet.
Tickets: £8/£5
Multi Offer: £2 off if also booking for the earlier talks
Venue: Watershed, 1 Canon’s Rd, Bristol BS1 5TX

2.00pm - 4.00pm
Looking For Archie Walking Tour
Join festival director Charlotte Crofts on this fascinating tour of Cary Grant’s Bristol – taking in haunts of his boyhood as Archie Leach and the places he visited on his many returns after re-inventing himself as Cary Grant. Concludes with a Prosecco toast to the Cary Grant statue in Millennium Square.
Tickets: £15/£10
Starts: Watershed, 1 Canon’s Road, Bristol, BS1 5TX; ends Après Bar, Millennium Square

4.30pm - 6.00pm
Cary Grant in Bristol - Afternoon Tea + talks at Avon Gorge
While many know Cary Grant was born in Bristol, far fewer are aware how often he returned.  In the apt setting of the hotel where he often stayed - over a tasty afternoon tea - hear from David Brown, whose holiday job at what was then the Grand Clifton Spa Hotel included looking after the star; from award-winning producer/director Michael Davies about the drama he is developing about Cary Grant and his mother, and from BBC Radio Bristol producer Tom Ryan who is working on a documentary about Cary Grant’s Bristol.  Price includes a sandwiches + cakes afternoon tea
Tickets: £25
Venue: Avon Gorge Hotel, Sino Hill, Bristol BS8 4LD

7.30pm - 10.00pm
North by Northwest
(Dir.: Alfred Hitchcock, 1959, USA, 136 mins, PG)
With a video intro by Col Needham (IMDb) & talk on Bernard Herrmann’s music by Matthew Sweet
Watch the Hitchcock classic, North by Northwest, in the suitably starry setting of Bristol’s Planetarium. With a video welcome from Col Needham, who even after watching more than 10,000 films still rates North by Northwest as one of his all-time top 10 favourites and names Grant as his favourite film actor + an introduction from Matthew Sweet to the atmosphere-enhancing score by Bernard Herrmann, composer of the music for seven Hitchcock films. Doors open at 7pm for star dome viewings accompanied by Herrmann’s soundtrack.
Tickets: £18/£13
Venue: Planetarium, We The Curious, Anchor Road, Bristol 5DB

12.30pm - 2.15pm
His Girl Friday
(Dir.: Howard Hawks, 1940, USA, 92 mins, U)
In a very early example of swapping the gender of key roles, Hawks chose to cast a woman (Rosalind Russell) as one of the lead characters in his screen adaptation of Ben Hecht and Charles MacArthur’s smash hit comedy play, The Front Page, and have her newly divorced from her boss (Cary Grant). What results is an exuberant mix of hard-boiled newsroom drama, hilarious wisecracks and ebullient romantic comedy that fully exploits its stars’ tangible chemistry and perfect comic timing.  The screening will be introduced by freelance journalist, film blogger, author and critic Pamela Hutchinson and forms part of BFI Comedy Genius - a nationwide season of classic comedy films, supported by funds from the National Lottery and led by Film Hub Midlands on behalf of the BFI UK Film Audience Network. #BFICOMEDYGENIUS
Tickets: £8/£5
£1 life-time membership of The Cube Cinema payable on the door
Venue:  The Cube Microplex, Dove Street South, Bristol BS2 8JD
Multi Offer: £2 off for double bill with Talk of the Town.

2.45pm - 5.00pm
Talk of The Town
Dir.: George Stevens, 1942, USA, 118 mins, U)
When Cary Grant’s character escapes prison after being wrongly accused of burning down a factory he’d campaigned against, he’s allowed to hide by posing as the gardener at the home of his childhood sweetheart (Jean Arthur). But there’s a problem – the house’s other occupant is a distinguished law professor (Ronald Colman) about to be nominated for a seat on the Supreme Court. With an introduction by Kathrina Glitre (UWE Film Studies).
Tickets: £8/£5
£1 life-time membership of The Cube Cinema payable on the door
Venue:  The Cube Microplex, Dove Street South, Bristol BS2 8JD
Multi Offer: £2 off for double bill with His Girl Friday