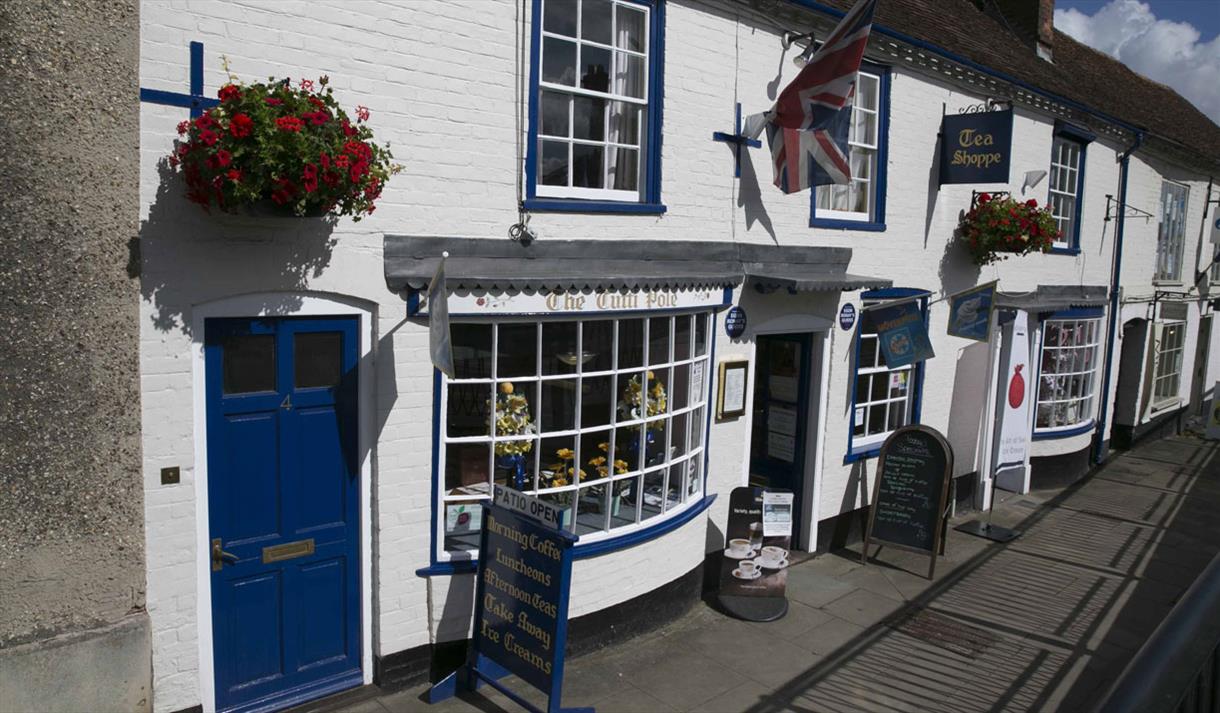 The Tutti Pole is a family run restaurant serving quality homemade food, situated close to the Kennet and Avon Canal in a grade ll listed building. The name derives from the ancient traditions of Hocktide, a ceremonial rite dating back to 1365 and is still celebrated in Hungerford each year. On the second Tuesday after Easter Two tithing men visit the homes of commoners, carrying Tutti poles dressed with spring flowers. When you visit the Tutti Pole, you can see replicas of Tutti poles, as well as many photographs of the Hocktide celebrations through the years. One of the owners Barbara Barr was the first female Tithing man and then Constable of the Town since records began, and Fiona her daughter is now privileged to dress the Tutti Poles each year and is following in the footsteps of her Great-Grand-Father, Father & Mother in the offices of the Town & Manor.    The Tutti Pole restaurant was started in 1981 by Norman & Barbara Barr and is still run by them with their daughter Fiona & Son-in-law Stephen who offer a warm welcome.  The menu at The Tutti Pole caters to practically all appetites. Breakfast and brunch might come in the form of the classic full English, eggs Benedict or the comforting bacon and cheese crumpets with many other options also available, cheese on toast with two poached eggs is also very popular or morning coffee which there is a large selection to choose from, with homemade toasted teacakes is a lighter option. At lunchtime, hearty homemade fare takes centre stage as diners pick from the likes of freshly prepared soup of the day with a roll or sandwich to several special dishes of the day, such as braised steak in red wine and mushrooms, steak & Kidney with dumplings or chicken casserole. The menu is extensive with lots to choose from including omelettes, quiches, salads, jacket potatoes, chicken kiev, scampi, fish cakes and a butternut squash, red onion & cranberry Tagine suitable for Vegans. There are always gluten free options. The extensive menu includes a special children’s menu or they are able to have a smaller portion of the specials which is an option for those with a smaller appetite.   On Sunday the roast’s are very popular, often followed by a homemade crumble or pie with fruit from the owners garden. As well as a selection of special desserts there is a wide selection of Mövenpick ice creams for afters that never fail to put smiles on faces. For the truly sweet-toothed the Tutti Pole is well known for its giant meringues and cheescakes, and the opportunity to enjoy a delightful Tutti Pole cream tea or afternoon tea shouldn’t be missed. The Luxury afternoon tea comes with a selection of finger sandwiches served with a homemade scone, clotted cream and homemade mixed fruit jam, a mini meringue, two mini cakes and Twinings everyday tea adding a mini bottle of Prosecco can turn it into a really special occasion.   With seating for 80 people inside and weather permitting a lovely patio seats a further 50 people, this restaurant is a wonderful place to start or finish a walk around the delightful historic town of Hungerford.   The Tutti pole is very popular with cyclists too and is a check point for several Audax rides.  The Tutti Pole welcome families and larger group bookings and often caters for coach parties, preferably with prior notice where we can tailor make a menu for you. The Eat Out Eat Well healthy eating award has been won by this establishment since the programme began in West Berkshire. As The Tutti Pole is next to the Canal many people come for a visit before or after a barge trip on The Rose of Hungerford.

Hungerford is 4 miles from the M4 Motorway Junction 14. Upon exiting the motorway follow the signs to Hungerford Town Centre.

The A4 also runs through Hungerford and the Town Centre is clearly signed from both directions.

The A338 also runs through Hungerford.

Hungerford is on the mainline railway from London Paddington and also from Bristol Temple Meads.

* The Tutti Pole is open from 10am to 4pm, Wednesday-Sunday.

We usually close a 2pm on Christmas Eve and do not re-open until the 28th December but it can change each year so always check the website. We are always closed on the 31st December and 1st January each year.