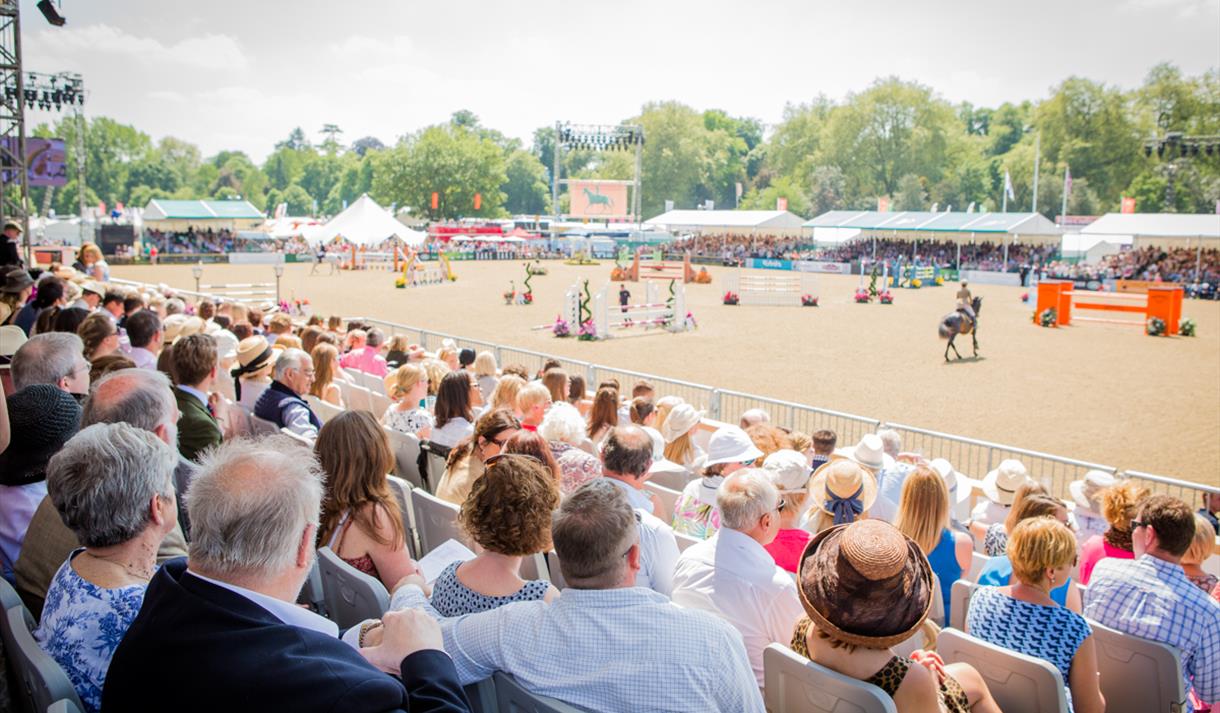 There are numerous exciting displays which take place at the Show including The Musical Ride of the Household Cavalry Mounted Regiment, The Mounted Band of the Household Cavalry, The King’s Troop Royal Horse Artillery, DAKS Pony Club Mounted Games and The Shetland Pony Grand National. There will also be international equestrian displays to be confirmed.

The site itself includes an extensive shopping village which hosts over 200 stands and there are many different places to sit and eat. It is the only time of year the public can access the private grounds of the Castle.

HM The Queen is the Show's Patron and often visits to watch her horses compete and does so on an informal basis.

Showjumping – Windsor hosts 5* international show jumping which is the highest level. Large prize fund which should attract top end riders. The biggest class of the week is the Rolex Grand Prix on Sunday afternoon. There are also lots of national show jumping classes.
Dressage – a sport which combines skill, elegance and power. On Thursday all competitors will ride a set series of movements. The top competitors go through to Friday’s freestyle where they ride their own test to their choice of music. This is a 4* competition which is high level.
Driving – The Land Rover International Driving Grand Prix takes place over 4 days and teams of horses and drivers compete.  These may be made up of a pair of horses or ponies or a ‘team’ which is 4 horses or ponies. On Thursday and Friday driven dressage takes place in the Driving Arena, Saturday is the marathon (a real highlight where the horses travel around the park from one obstacle to the next), and finishes on Sunday with the obstacle driving (through pairs of cones against the clock) in the Driving Arena.
Showing – Windsor is one of the UK’s premier events for Showing and there are many different championships which take place across the week.  More than 1300 horses and ponies compete in the showing classes.

he Musical Drive of The King’s Troop Royal Horse Artillery – an adrenaline filled, fast paced display where teams of horses fly around the arena pulling traditional wheeled guns at full tilt.
The Musical Ride of The Household Cavalry Mounted Regiment and The Mounted Band of the Household Cavalry – A display which is renowned worldwide.  Most people would recognise them from Horse Guards Parade in London where horse and rider stand in ceremonial dress.  The Musical Ride consists of high speed, precise moves set to beautiful music.
DAKS Pony Club Mounted Games - Five teams representing England, Scotland, Wales, Northern Ireland and Republic of Ireland take place in qualifiers throughout the week with the final taking place in the afternoon of Sun 13th.
The Shetland Pony Grand National – this involves the ponies racing over miniature Grand National style fences.

What to see and do

There are five different arenas which are accessible by all ticket holders.

In addition there is a shopping village with a new design, look and feel with over 250 shops, both equestrian and non equestrian goods.

There is also a food festival, and a marquee featuring shops from The Royal Warrant Holders.

There are restaurants, bars, cafes and food stalls throughout the site, along with a funfair.

Tickets can be bought from Royal Windsor Information Centre 01753 743589 or buy tickets online.